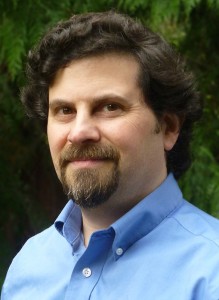 David Blatner is the author of 15 books, translated into 14 languages with over a half-million copies in print, including Spectrums, The Joy of Pi, and The Flying Book. As an expert on digital publishing, he has lectured in five continents over the past two decades. He and his wife and two sons live, explore, and write outside Seattle, Washington.

You can learn more about David at www.63p.com

I was born in Palo Alto, back when it was just a sleepy little liberal “college town” next to Stanford University. From an early age, I was lucky enough to have four great parental influences: A psychotherapist mom interested in interpersonal relationships; a graphic designer stepmom fascinated by visual design and creativity; a father who was a groundbreaking psychiatrist and philosopher; and a stepfather who worked on the forefront of artificial intelligence and computer science at SRI, Xerox PARC, and later Stanford. The result: I’m fascinated by pretty much everything, love figuring out how it all works, and love to share what I’ve discovered with others.

As a child of the mid-1970s, I played with some of the world’s first laser printers, graphical user interface workstations, and 14-inch wide “floppy disks.” I bought a 128K Mac on my way to college, and by 1985 was the resident “publishing guy,” having learned PageMaker and Illustrator.

The past 20 years have led me around the world — presenting, learning, exploring, and writing. The topics of my books have varied widely, but as far as I can tell, they appear to follow three fundamental threads:

In my first popular science book, Silicon Mirage: The Art and Science of Virtual Reality, I explored the amazing new work of VR and how it could revolutionize how we interact with computers and our environment. In The Joy of Pi, I dug up 2,500 years of study into the relationship between circles and squares (and explained how the number π was the perfect symbol for how we strive to know the unknowable). In Judaism For Dummies (co-authored by Rabbi Ted Falcon), I helped explain a world of symbols, beliefs, and rituals that attempt to bridge our rational and irrational realms. And in The Flying Book, I delved into why airliners get off the ground and why they’re safer than you can imagine — even though the reason they fly is even weirder than what we learned in school.

When I began work on Spectrums: Our Mind-Boggling Universe From Infinitesimal to Infinity, I actually expected this short book would be relatively simple. Instead, it was the hardest project I’ve ever undertaken, consuming four years of research, writing, and illustration. But most curious of all, the book reflects a distillation of over 40 years of interests, harkening back to my parents’ diverse backgrounds: of science and philosophy, of art and imagination, and of our relationships with each other and with the world around us.