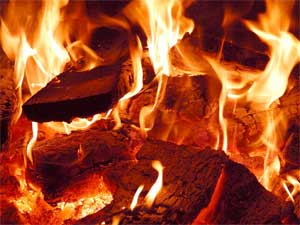 The science-fiction author Ray Bradbury called his 1953 classic, about a man who burned books for a living, Fahrenheit 451. Of course, he could have named it the metric equivalent: Celsius 233. This is the temperature at which paper made from wood pulp begins to burn.

If you place an intense heat source under a piece of paper, those pressed-flat plant fibers will undergo a radical transition: Around 150°C (300°F), the cellulose material starts to decompose, releasing into gases. We typically call this mixture of hydrogen, oxygen, and tiny carbon particles smoke. The more particulates that are released, the more smoky it appears. Some substances in paper don’t burn without far more heat, of course, so some material remains, darkened, called “char.”